You may have seen Eric Grange’s precomputed Mandelbrot set data – read the Christmas announcement and the followup. He has generated and is hosting the fractal as a multi-level tiled data set: that is, as a structure of varying levels of detail, where each level of detail is twice as large as the one before. His tiles are not images, but rather a table of the number of iterations required for each point.  These values can then be mapped to colour as the client application decides.

You can picture this as a pyramid, or as an infinitely divided square. The first level, level 0, has one tile. Level 1 subdivides level 0’s tile into two on each axis, so four total.  Level 2 subdivides each of these tiles, as so forth.  Since each tile has the same dimensions in pixels, but represents a smaller area of the data, you get higher and higher resolution data in each tile.
This is a common method of storing similar data – I’ve previously used it for geographic maps, for example. Often tiles will be images, but in this case they are data that can be converted to images.

As of Dec 27, there are fourteen levels (0-13.)  At level 13, there are 213 tiles in each dimension making a Mandelbrot set 8192 x 8192 tiles on a side.  At 256 pixels square, this is 2097152 pixels a side, or 4398046511104 pixels in total.  That’s quite a lot.  Add in the other smaller levels and you have an enormous of data, many gigabytes.  For comparison, zooming in from the whole earth to a few meters is only a few more orders of magnitude; at 1 pixel/meter, zoomed in to the maximum zoom on this set makes the whole Mandelbrot set, in pixel space on your screen, the size of a large country.

I thought it would be a fun project to write a small viewer app for this dataset, so here it is: a cross-platform (Windows and OS X) tiled data viewer written in Delphi and FireMonkey. 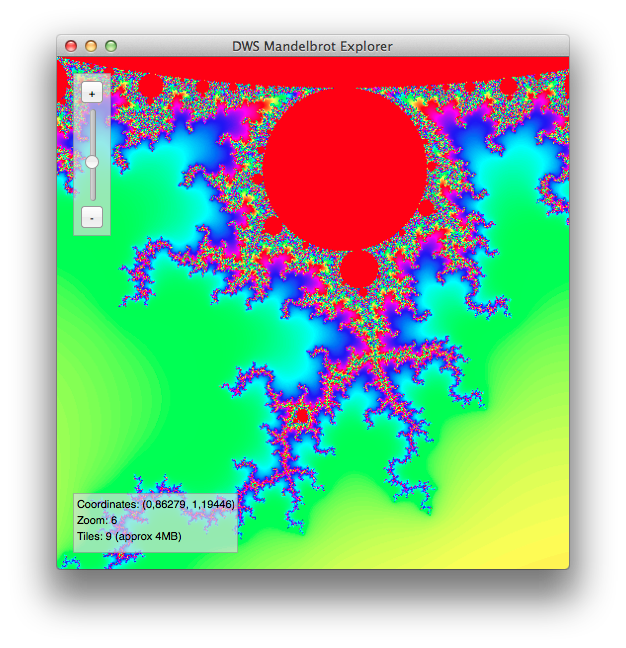 Meanwhile, it’s been a fun way to spend a day or two!