Transparent graphics are used everywhere these days.  Half the UIs you will have used today will have made some use of composited graphics, overlays, or something similar.  You’ve probably seen:

How do you achieve all of these with Delphi or C++Builder?

This is part 1 of a short series that examines alpha-aware graphics using native GDI only – not GDI+, not DirectX, and not with any other custom non-GDI graphics implementation.  By the end of the series I will have introduced a small alpha-aware canvas class that you can use to draw standard shapes (rectangles, ellipses, etc) just as you can with the normal TCanvas (and using standard TFont, TPen and TBrush objects), to compose several layers of alpha blended graphics together, and to draw on glass on Vista and Windows 7.

This is a screenshot of the demo program which I used to test this class.  It’s not the prettiest demo program ever, but you can see all of the above in action in this screenshot: 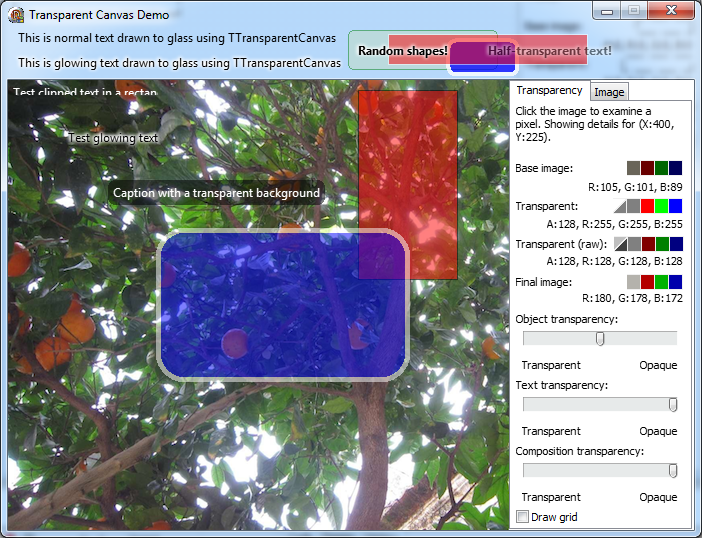 A lot of this is quite hard with standard VCL classes.

A quick introduction to partial transparency

Windows uses GDI for most drawing, and GDI was never intended for something as complex as partial transparency or composition.  There aren’t many options for implementing transparency.  One common one is “colour keying”, where a single colour is completely transparent.  Windows can be color-keyed to create holes or transparent segments, or bitmaps on toolbar buttons use this to draw and have a transparent background.  But we want something more complex: partial transparency, where a pixel is neither fully on nor fully off.

This article and its sequel assumes you’re familiar with the VCL TBitmap class and with Scanline, and are moderately familiar (or at least aware of) the internal Windows objects used for drawing – things like what a device context is, a DIB, the use of SelectObject, etc.  However, I’ll try to explain the key bits as I go along.

A Windows device-independent bitmap can have varying degrees of bit-ness (1, 2, 4, 8… this can include a palette, something out of scope for now).  Two of these interest us: 24 and 32.  A 24-bit DIB has three channels of eight bits each: red, green and blue.  A 32-bit DIB has a fourth channel, which is either unused or can be used for alpha.  Alpha is the degree of transparency: 0 is fully transparent (invisible), 255 is fully opaque.

Windows provides one function for drawing 32-bit bitmaps using alpha for the fourth channel, the alpha-aware equivalent of BitBlt: AlphaBlend.

The problem is that apart from this one method, GDI knows nothing of alpha.  The use of this fourth channel is effectively user-defined.  To GDI, when drawing, you are effectively using a three-channel bitmap with a fourth present that it doesn’t know how to interpret.  If you draw to a 32-bit bitmap with GDI functions, anything present in this fourth channel will be clobbered – its value will be reset to 0.  0, unfortunately, means ‘fully transparent’.

AlphaBlend with per-pixel transparency is therefore generally used when you create a 32-bit bitmap some other way, such as by loading one from file.  A good example of this is this great article on an alpha-blended splash screen, where the splash screen is loaded from a transparent PNG file.  It also explains some terminology in far more detail (and accuracy) than I will here.

AlphaBlend is also useful for non-32-bit bitmaps, i.e. bitmaps without a fourth alpha channel per pixel.  It can be used this way with ‘constant alpha’, that is a set alpha value across the whole image.

This is the simplest way to sue AlphaBlend, and is where we’ll start.

A simple but useful example is to blend a bitmap (without alpha, just a standard opaque bitmap) over another bitmap with a constant transparency.  An example of this is a selection rectangle: it’s one solid object, blended over the other.  Transparency does not change from pixel to pixel over the bitmap.

AlphaBlend has a BLENDFUNCTION parameter.  This structure is how you control how the function’s blending behaves – the other parameters are identical to BitBlt (which opaquely draws one image over another.)  The first two of the four parameters only have one valid value.  That leaves two useful ones:

Here is a simple code snippet painting a TPaintBox, with two predefined TBitmaps for the background and blended-on-top foreground images.  First, setting up the bitmaps (note there’s no worrying about the bitness, we’ll get to specific bits / pixel formats later):

This gives the following: 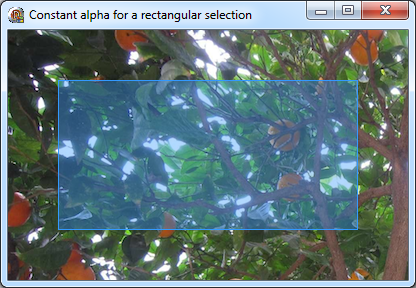 Excellent!  That looks pretty close to an Explorer-style transparent selection to me.

(Note that AlphaBlend will stretch the source image, so for something like a selection you don’t need to create a bitmap the exact size of the user’s selection – create a single small one and draw it to the larger coordinates, and it will stretch as you paint it.  This will also be a lot faster than creating a bitmap of the ‘right size’ every time the selection rectangle changes.)

So far so good!  You now have a grasp of:
What next?  Per-pixel alpha, that is, a different degree of transparency for each pixel.

Why does Windows require a pre-multiplied bitmap?  Probably it is to improve performance, but this comes at the cost of requiring your code to implement the premultiplication.  Chances are, this code will be slower than the equivalent code that could have been implemented in the graphics driver.

You can use the inbuilt PRGBQuad type to point to a specific pixel if you wish, but I’m going to use my own type, for two reasons: first, TRGBQuad’s alpha channel is named ‘rgbReserved’; second, this custom type will be extended in Part 2.  The definition here is missing some key bits.

This structure lets you access each channel individually, or the whole value as a 32-bit value.

Next, the above code that blended the front bitmap, modified for premultiplied per-pixel alpha (remember the MSDN quote describing the algorithm, above) using ScanLine to get direct access to the pixel data.  When you use ScanLine, you need to be aware of the pixel format, that is, exactly what a pixel is and what your pointer points to.  Here, the bitmap’s PixelFormat is set to pf32Bit, to ensure first that it has the four channels / 32 bits that AlphaBlend requires for per-pixel use, and second so that addressing a pixel as a PQuadColor is correct.

As a demo, this varies the alpha across the image horizontally:

Finally, the call to AlphaBlend is changed:

When run, this code gives you the following: 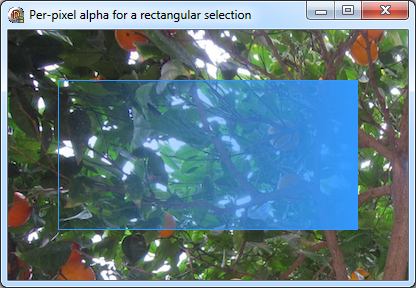 Awesome!  That is per-pixel alpha transparency, blended over another image.

So far, this article has covered:

That’s actually a far bit of material.  Part 2 of this series will continue: